If there is something I love it is seeing the vegan movement make its way into mainstream cuisine and restaurants!  The worst thing in the world for a vegan is showing up to a restaurant with zip, zero, zilch available to eat on the menu…trust me, its happened to me 😒 Recently, I had the opportunity to try out the new vegan menu options at a die hard burger joint 🍔
Tucker Duke’s is a Southern style burger joint that prides itself on bringing craft burgers, beers, and snacks to South Florida.  Chef Christopher Cartenuto has outdone himself!  Now, they are bringing the vegan movement to their menu and it couldn’t be more delicious!  Keep reading to check out the new menu items, and what it was like to dig in to their Toothless Impossible Burger!!! 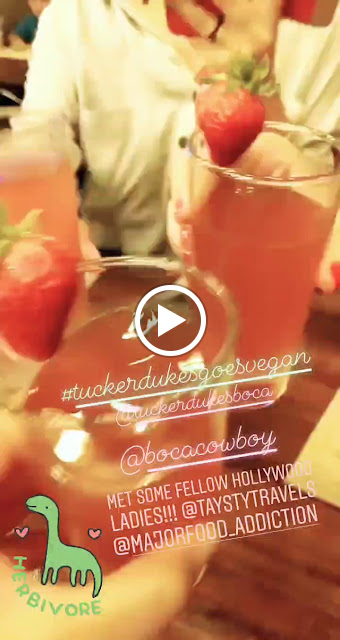 First off, I would like to thank Take A Bite Out of Boca for the invite to experience Tucker Duke’s!  Thanks Shaina!!!  I also had the opportunity to meet a bunch of new foodie friends…who can say no?!?!  Cheers to that! 🍷 We kicked off our meal with a Strawberry Lemonade Cider from Broski Ciderworks 🍓🍋
Along with the cider, which was totally delicious, we snacked on some Portobello Mushroom Fries.  These were a win for me…panko breaded, they were so crispy and savory 🍄🍟 Honestly, if you didn’t know they were made from mushrooms you probably wouldn’t be able to guess it.  They paired up great with the vegan horseradish aioli.  I would totally want these as a side to the Toothless.  Just keep reading to learn about the new burger!

Next up were the Cauliflower Tots.  These reminded me less of tots and more like arancini balls or savory fritters.  The outside, also nice and crispy, and the inside creamy and delicious.  They totally melted in my mouth, and the sweet chili Dijon dipping sauce was awesome…so yeah an awesome sauce LOL! 😜

The star of the show!  The Toothless!  Thanks to Loren over at Tucker Duke’s for spearheading our vegan cause and getting this burger on the menu!  Named after her very own pup, Toothless, this burger was created using Impossible Foods  meat, vegan cheddar, spring mix, hummus, Veganaise, and pickled veggies.  I was a little wary when they told me it would be served on a gluten free bun, BUT, this bun was awesome!  No complaints from me!  By the way, did you know that all the burgers on the menu were named after the dogs of their staff??? 🐶
This burger was outrageous!  As everyone at the table took their first bite, that is of course, after taking all their pictures for their social media (you know what I’m talking about if you’ve ever shared a meal with a blogger or influencer 📸), everyone’s eyes all pretty much communicated the same thing.  How in the heck did they do this???  Meat eaters were dumbfounded, vegans rejoiced, and I swear I could hear what sounded like a stadium cheering.  Hands down, one of the BEST burgers I have ever had…vegan or otherwise!  All the flavors and textures worked so well together 🍔
The Toothless was served with a side of vegan Dirty Rice.  I’m not a huge fan of dirty rice, it is just a personal preference, but wow this was tasty!  Impossible meat, peppers, onions, garlic, carrots, rice and Cajun seasoning.  I must admit that I ate it all!  The rice was cooked perfectly, and the vegan meat really made all the difference.

And of course, one of the biggest pet peeves of a vegan is dessert options!  At a mainstream restaurant, the choices are usually none, just sit back and watch everyone else dig into something that, let’s be honest, totally completes the dining experience 🍨  Well Tucker Duke’s and Chef Chris took all of this into consideration and as a vegan, I truly THANK them!!!
For our media dinner, partnered up with Tartastic Bakery to provide two dessert options,  Carrot Cake with a raspberry sauce and Banana Chocolate Chip Cake with a dark chocolate sauce 🍰 These were also very impressive.  I have had the misfortune of trying vegan baked goods that were just awful…almost as if no thought was put into the process, their final product, or how it tasted.  These two were both worth only eating half of and packing the other half to enjoy for breakfast the next day with my coffee ☕😍

Overall, I am very impressed with Tucker Duke’s taking their vegan patrons into consideration and really running with it.  They have created some super tasty dishes to keep everyone at the  table satisfied, vegans and non~vegans alike!  Everything I dined on that evening was delicious and I will definitely be back to enjoy them again!  Thanks again to Shaina from Take A Bite Out of Boca, Chef Chris, and Tucker Duke’s for having me to try their new vegan menu items!
Trust me & visit Tucker Duke’s in Boca, located at 1658 N Federal Highway, Boca Raton, FL 33432 or their Deerfield location, at 1101 S Powerline Road, Deerfield Beach, FL 33442 🌎
Take a moment & share the social media love 🍔
Connect with Tucker Duke’s on social 📱
Facebook | Instagram | Twitter

Disclosure: Services were provided to me for editorial consideration by Tucker Duke’s.
All opinions are 100% my own.